STOP THE MASSACRE IN GAZA

Assemble: 12PM at Israeli Embassy to March to Parliament

More than 600 Palestinians have been killed and more than 3,000 injured since 7 July, when the Israeli army launched its military operation on Gaza. On 20 July alone, Israeli troops massacred 67 Palestinians in the Shejaiya district east of Gaza City.

The UK government is refusing to act to end the slaughter, and respect Palestinian lives. The new Foreign Secretary said “Israel has the right to defend itself”. Israel is not defending itself: this attack on Gaza is simply the latest stage in a long, brutal, illegal, military occupation. We demand that the British government calls for an immediate end of Israel’s action – which is fundamentally based on the collective punishment of the Palestinian people.

Israel is in violation of international law with its attack on the civilian population. The UK should be making clear that unless Israel ends this bloody campaign it will move to impose sanctions, in particular that it will not buy or supply military equipment that has or could be used or tested as part of its illegal occupation or as part of the collective punishment of the Palestinian people. As part of our campaign we should target firms which are complicit with Israel’s war industry.

Some of the munitions Israel is currently deploying may not be specifically prohibited under international humanitarian law, but according to B’Tselem, “rules of humanitarian law render their use in the Gaza Strip illegal. One of the most fundamental principles is the obligation to distinguish between those who are involved and those who are not involved” 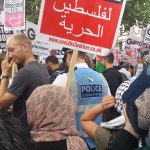 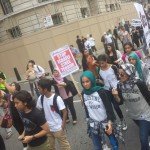 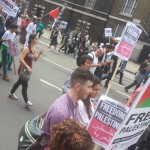 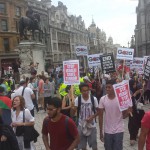 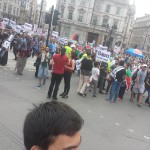 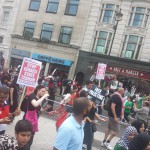 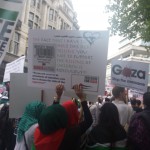 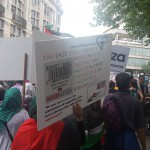 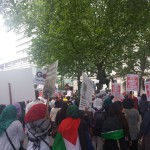 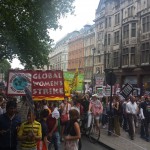 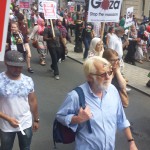 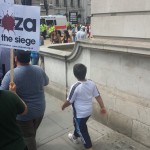 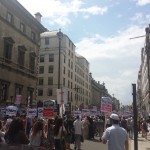 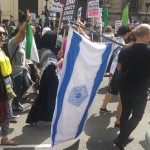 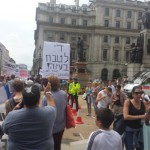 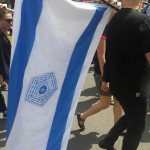 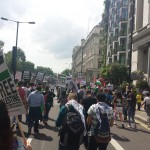 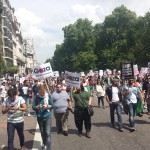 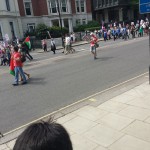 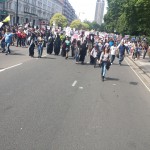 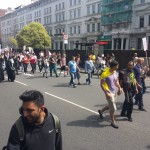 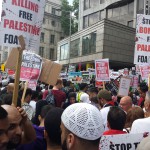 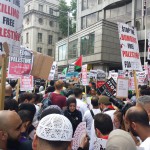 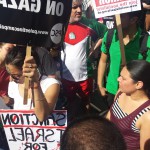 A few pictures from the demonstration in London on Saturday. It was great to see such a large turnout, and helped restore a little bit of my faith in humanity. Thousands of people showed up as we marched 3 miles from Whitehall, outside 10 Downing Street, to the Israeli embassy. I was also pleased to see that the heat combined with the fact that many of the Muslims in this demonstration were fasting was not enough to hold back the outrage that led us to this demonstration.

This is not the first attack by Israel, nor will it be the last. It is important to continue boycotting goods that profit Israel, it is important not to forget the Palestinians once this stops trending on social media. Free Palestine!

Read their announcement below:

PGGM – Statement regarding exclusion of Israeli banks
PGGM recently decided to no longer invest in five Israeli banks, namely Bank Hapoalim, Bank Leumi, First International Bank of Israel, Israel Discount Bank and Mizrahi Tefahot Bank. For several years PGGM has been in dialogue with these banks. The reason for this engagement was their involvement in financing Israeli settlements in the occupied Palestinian territories. This was a concern, as the settlements in the Palestinian territories are considered illegal under international humanitarian law. Moreover, international observers have indicated that the settlements constitute an important obstacle to a peaceful (two-state) solution of the Israeli- Palestinian conflict.

In 2004 the International Court of Justice concluded in an Advisory Opinion that the settlements in the Palestinian territories are in breach of Article 49 of the Fourth Geneva Convention relative to the Protection of Civilian Population in Time of War. This article prohibits an occupying power to transfer its own citizens to occupied territory. International bodies, including the UN General Assembly and the UN Human Rights Council have adopted various broadly supported resolutions, which state that the settlements are considered illegal. Israel disputes this interpretation of the applicability of international law.

In line with the Responsible Investment policy a dialogue has taken place with the before mentioned banks. Engagement is an important tool to allow PGGM to act as a responsible owner on behalf of its clients. The dialogue showed however that, given the day-to-day reality and domestic legal framework they operate in, the banks have limited to no possibilities to end their involvement in the financing of settlements in the occupied Palestinian territories. Therefore, it was concluded that engagement as a tool to bring about change will not be effective in this case. As concerns remain and changes are not expected in the foreseeable future, PGGM no longer invests in the companies concerned as of January 1st 2014.

PGGM continues its dialogue with a small number of other companies on the same issue and will report on progress through its regular reporting. 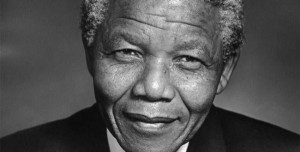 Nelson Mandela was one of the greatest leaders of our time. A man who even after spending 27 years in prison showed no bitterness, but forgiveness. A true legacy, and I doubt there will ever be such an individual in our lifetime. May he rest in peace and may his influence continue and help those who are oppressed.

The Independent published an article by Gil Hilel, an IDF soldier who served in a Sahlav unit at Hebron in 2001-2003, who has decided to speak out about her experiences as an IDF soldier.

It led me to discover a very interesting organisation, Breaking the Silence. They are an organisation composed of veteran IDF soldiers who collect testimonies from soldiers about their past service in the occupied Palestinian territories. There are some shocking stories on here, and some stories which confirm information which most of us who choose not to get blinded by corporate controlled media are already aware of. I strongly recommend browsing through it.

Here is a video of Gil Hilel speaking for Breaking the Silence.
httpv://www.youtube.com/watch?v=hyfkz8TcRCs

You can read the full article after the jump, or by visiting the article on The Independent linked above.