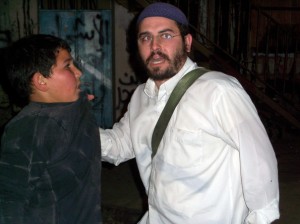 Settler armed with an M-16 attacking a young boy

Jerusalem – Ma’an – Israeli police detained an Israeli settler and confiscated his weapon after he attacked a member of the Al-Ghawi family in the Sheikh Jarrah neighborhood of East Jerusalem on Sunday evening.

Maysoon Al-Ghawi told Ma’an: “Children were playing in the area when a settler came, showed off his weapon, and tried to shoot people who intervene – including police. He was detained and police confiscated his weapon.”

The incident came two days after hundreds of Israelis protested in Sheikh Jarrah against what they have termed settler attempts to ethnically cleanse the neighborhood of its Palestinian inhabitants.

The settler first threw rocks at the tent the Gawi family has stayed in since being evicted, provoking angry shouts from the family. When the settler descended to the street, he physically attacked a neighbourhood boy, shaking and pushing him. Other adults stepped in and the settler began pushing and eventually punched Nasser Gawi. Numerous blows were exchanged before the settler began wildly waving his M-16 rifle, he then cocked the gun and pointed it at neighbourhood residents and internationals who were present.

The video below shows Nasser threatening the residents with the M-16 rifle. You can hear the gun being cocked.