One year on – Israeli assault on Gaza

12 months have passed since Israel’s assault on Gaza named Operation Cast Lead, Palestine is yet to recover. Israel’s economic siege remains in place and no repair work has been carried out in Gaza due to restrictions imposed by Israel.

Israel’s use of white phosphorus on civilian targets, killing of innocent people waving white flags amongst other revelations in the Goldstone report has not given them a good moral standing. Israel is accused of breaking humanitarian law and Geneva conventions. Israeli politicians face the risk of arrest under charges of war crimes. The world stands by however, and seems to allow Israel to get away with breaking international law.

On to President Obama who, in his speech in Cairo, Egypt, had so much to say, has done very little. Israel continues to build settlements, desbite Obama saying that ALL settlement building must freeze. Netanyahu simply responded by saying a partial freeze will be in place (i.e. disregarded Obama’s request). Despite this blatant disregard, nothing was said, Israeli’s settlements continue to be built. Obama full of false promises comes to no surprise really.

On to Prime minister Gordon Brown, who is so worried about embarrassment that he puts saving face before the lives of the Palestinians. He bows to every Israeli demand, not much of a man, but merely a puppet. He is currently attempting to change the laws so Israeli politicians cannot be arrested in the UK under war crime charges, simply because it’s an embarrassment to his government. He is fully aware however that these courts work on an “Innocent until proven guilty” basis, thus, if the Israeli politicians are not guilty they have nothing to fear. The reason they do fear is because they ARE guilty, Brown aware of this fact, continues to try and protect these war criminals. He is in league with the war criminals, and equally responsible for little and no progress made in Palestine since Operation Cast Lead. Shame on the Labour government, shame on him. This being said, the Conservative government are no better. David Cameron commended Israel on Operation Cast Lead. A deluded man who I fear will be in power come next elections. Time will tell how his leadership pans out, but I’m pretty certain he’s in favour of Israel.

On to Egypt’s sad excuse of a human being, president Hosni Mubarak. The Viva Palestina Convoy is composed of 250 vehicles and ordinary people who have dedicated their time and efforts into rebuilding Gaza as well as they can without the much needed political backing of the Western governments. This convoy has been forced to detour thanks to Cairo’s obstruction and Mubarak’s bull headedness. So Egypt refused to allow it to go through the Red Sea port of Nuweiba, and the convoy is now taking a detour through Syria Latakia attempting to enter Egypt through the Mediterranean port city of El-Arish. The convoy was scheduled to deliver medical, humanitarian and educational aid to Gazans on December 27, which marked the first year anniversary of Israel’s three-week massacre. I have no doubt that the convoy will eventually reach where it must, no help of course from Mubarak. This man should be ashamed. A man who shows no compassion for his fellow Arabs living in poverty as a result of the actions of Israel.

So, one year on, not much has been done. I speak on behalf of all supporters of Palestine however when I say that in 2010 we will not forget the massacre by Israel. We will not forget the continuing oppression, the illegal occupation and the apartheid wall.  We will continue to protest, continue to boycott, make our voices heard, support the Palestinians with what is in our power to do so. Donate books, clothes, money, anything which will help get Gaza back on track. We will make sure that our politicians do not hear the end of it. Israel are owed a tribunal for their war crimes, let’s make it happen in 2010.

Tzipi Livni is proud of murder

A British court issued an arrest warrant for Israel’s former foreign minister over war crimes committed in Gaza this year. It was then withdrawn it when it was discovered that she was not in the UK.

Tzipi Livni who was a member of the war cabinet during Operation Cast Lead, was due to attend a meeting in London on Sunday but cancelled her attendance in advance.

Israeli ministers who wish to visit the UK for personal reasons have begun asking the Israeli embassy in London to arrange meetings with British officials thus offering legal protection against arrest.

1,400 people were killed, mostly civilians in an attack by Israel on Palestine over the course of 3 weeks. Israel claims that this was an act of self defence, but again I say that the women, children and innocent men killed were hardly a threat to Israel.

Livni’s office described her as “proud of all her decisions regarding Operation Cast Lead”. It added: “The operation achieved its objectives to protect the citizens of Israel and restore Israel’s deterrence capability.”

Shameful statement to make. I hope that Israel is brought to justice for its war crimes. 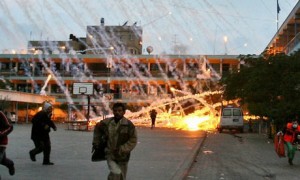 An air strike by Israel on a UN school.

The UN Human Rights Council report on the Israel-Gaza massacre war was released on the 15th of September 2009. A 575 page document (pdf) outlining the UN Fact Finding Mission on the Gaza Conflict. This investigation was led by Justice Richard Goldstone, former judge of the Constitutional Court of South Africa and former Prosecutor of the International Criminal Tribunals for the former Yugoslavia and Rwanda.

Now, I have not read all 575 pages in detail, merely skimmed through it. From what I read however there is no doubt in my mind that Israel are responsible for committing war crimes in the period from 27 December 2008 and 18 January 2009.

I quote this from the report itself:

The operations were carefully planned in all their phases. Legal opinions and advice were given throughout the planning stages and at certain operational levels during the campaign. There were almost no mistakes made according to the Government of Israel. It is in these circumstances that the Mission concludes that what occurred in just over three weeks at the end of 2008 and the beginning of 2009 was a deliberately disproportionate attack designed to punish,  humiliate and terrorize a civilian population, radically diminish its local economic capacity both to work and to provide for itself, and to force upon it an ever increasing sense of dependency and vulnerability. (Page 525).

Goldstone’s team looked in detail at 36 incidents during the war. The report found Israel to be in breach of the fourth Geneva Convention. It studied the deaths of 22 members of the Samouni family who, following instructions from Israeli soldiers, were sheltering in a house in Zeitoun, east of Gaza City. The house was then hit by Israeli fire.

There were 7 instances where civilians waving white flags were shot while leaving their homes. Direct attack on the al-Quds Hospital. The list goes on. Of course, the confirmation of the use of white phosphorus was also present in this report.

The video below, courtesy of The Guardian shows Richard Goldstone issuing his assessment of atrocities on both sides of the conflict:

Mark Ragev, who some of you may be aware, I am not a fan of, was in this video. He called the UN Human Rights Council a Kangaroo Court, and is of course defending Israel. A Dr Robbie Sabel also featured in this video, a man I will be doing some research on. Seems pro Zionist to me anyway, also talking in defence of Israel.

Israel must think the world gullible to continue to deny being responsible of war crimes. As though repeatedly denying it will make this issue disappear. It’s time for Israel to face the music. I do hope that Israel is brought to justice.

I am interested to see how the international community will respond to the findings of this report, especially the United States of America and Great Britain. So, I wonder now, is America’s war on terror going to switch to Israel at any point, a nation that is responsible for causing terror, humiliation and committing war crimes in Palestine. Highly unlikely.